Facts inform us. Stories move us. Both have their place, but the power of story can’t be denied.

I recently got to work on a project that is a story in itself. The Arapahoe Philharmonic in Englewood, Colorado, approached me in January to help them tell the story of their March concert, specifically a new orchestral composition to be debuted. Erin Acheson, the executive director, knew the information they would normally share about the time, place, program, and how to buy tickets wouldn’t communicate why this concert was one people wouldn’t want to miss. That’s where I came in.

Finding The Story In The Facts

Good storytelling has interesting characters we can identify with, conflict and challenge to overcome, and engages our senses through language. Here’s a synopsis of this story’s context:

Composer Jack Frerer was visiting Denver from New York for the first time in May 2019 when the latest Colorado school shooting happened, at STEM School Highlands Ranch. In response, he set out to create music that would provide a place for the expression of a community’s shared grief and empathy, collaborating with two Coloradan artists to increase its authenticity. The result, a ten-minute composition called splinter, will be performed by the Arapahoe Philharmonic as part of its March 27 program, “Apotheosis of the Dance.”

Getting To Know The Characters

Those are the bones of what Acheson told me. From there, I arranged to interview the main characters: Frerer; the librettist, Xuan Chi Sullivan; the music director, Devin Patrick Hughes; and the baritone soloist, Luke Sutliff. In each phone conversation, I had the privilege of hearing their hearts. Sullivan and Sutliff both shared freely with me their own stories of having been impacted by gun violence growing up. To a person, all four also talked about their collaborative quest to use this “love song to Colorado,” as Sullivan calls it, to bring a community together instead of dividing it further in the face of trauma.

Telling The Story And The Facts

Ernest Hemingway famously wrote a story in six words: “For sale. Baby shoes. Never worn.” I’m no Hemingway, so my story used a lot more words than that. But I did my best to employ storytelling techniques so that hopefully others will be motivated to come hear the universal message in splinter.

And yes, at the end of the story I gave the readers all the facts on “Apotheosis of the Dance”: dates, times, location, the entire program, and how they could buy tickets.

For maximum engagement and persuasion with your audience, that’s the order to use: Story first, facts second, to guide specific action. Engage the heart and mind, because behavioral scientists tell us emotions have a lot more to do with our decision making than we think. For more on that, I’ll point you to two excellent books about story-based messaging:

What’s your story? Will it stick? It might not be as deep as this one, but it matters to you. I can help you tell it. I’ve worked with businesses, nonprofits, and individuals. Contact me today. 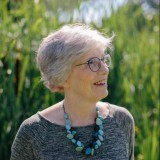